You are here: Home / Mold / Can Mold On Bread Make You Sick? 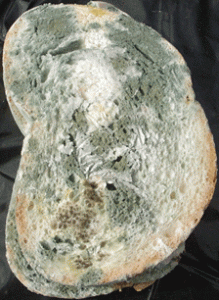 Mold on bread is a common occurrence when the bread is left in a warm damp place. This happens because mold spores are in the air all the time and with time settle on surfaces including exposed food such as bread. The bread can be contaminated with mold spores from the bakery and that is why bread develops mold growth even before it is unwrapped. The carbohydrate and water content of bread make it an excellent medium for mold growth. The reason you see mold on bread at the store that isn’t past it’s sell by date is usually because the bread wasn’t stored properly between the bakery and the store.

It is erroneously believed that most mold on bread is Rhizopus. The truth is that any mold can grow on bread. In fact the common types of mold on bread are Aspergillus and Penicillium.

If you discover mold on bread, inspect other foods in the area to determine whether the mold spores have spread. Trying to get rid of mold on bread to save the bread is not recommended or easy. It is recommended to throw away the moldy bread and disinfect the areas it has been touching since some mold spores may have been left there.  When you discard the moldy bread, wrap it in a plastic bag to prevent spores from spreading everywhere.

Can Mold On Bread Make You Sick?

Yes, if the type of mold contaminating the bread is toxigenic (toxin producer) and it has produced significant amounts of the toxin. Some misleading advice suggests that moldy bread can still be eaten if you remove the moldy bits and toast what’s left. You should not eat moldy bread with or without toasting. Eating moldy bread may be dangerous. Mold that you may not be able to see may remain throughout the bread. Sometimes it’s not even the mold that you cannot see, Some types of mold produce highly toxic compounds called mycotoxins which you cannot see. Mold spots are an indication that the food is beginning to rot and should be discarded.

Whether one gets sick or not also depends on individual’s susceptibility. Some people may require relatively high concentrations of the toxin to get sick. Sadly, in major towns of some poor countries street people including children eat moldy food from garbage bins, but thank God they rarely get sick.

How to prevent mold growth on bread

Moisture is one of the key contributors to the growth of mold on bread.  Many times bread put in its wrappers while it is still warm contributes to faster mold growth because of the moisture in still warm bread.  The bread wrapper should not be airtight so as to avoid accumulation of moisture. Bread should be stored in a cool dry place.

A new study has shown that sterilizing bread in a microwave could extend the shelf life of bread by 60 days, thus cutting on waste. For more information about this study see Mouldy Bread a Thing of the Past?

Dr. Jackson Kung’u is a Microbiologist who has specialized in the field of mycology (the study of moulds and yeasts). He graduated from the University of Kent at Canterbury, UK, with a Masters degree in Fungal Technology and a PhD in Microbiology. Jackson has analyzed thousands of mould samples from across Canada. He also regularly teaches a course on how to recognize mould, perform effective sampling and interpret laboratory results. Jackson provides how-to advice on mould and bacteria issues.

What causes black mold? Black mold is caused by excessive moisture. The source of moisture…

Please enter the Page ID of the Facebook feed you'd like to display. You can do this in either the Custom Facebook Feed plugin settings or in the shortcode itself. For example, [custom-facebook-feed id=YOUR_PAGE_ID_HERE].

Disclaimer: Information provided on this website is believed to be accurate or to be from reliable sources. However, the creators of this website shall not be held liable for any special,
consequential, or exemplary damages resulting in whole or in part, from the readers use of, or reliance upon the material contained on this website.