What Is Black Mold? Stachybotrys chartarum

Media sensationalism has caused a great deal of fear about black mold. But not all black molds are toxic, and not all “toxic molds” are black. So, what is black mold? 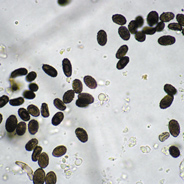 Stachybotrys chartarum and Aspergillus niger are 2 of the black molds that are toxic (toxigenic), ie., they produce mycotoxins. These two black molds may be found growing in moisture damaged buildings.

Individuals sensitive to molds may experience symptoms such as nasal stuffiness, eye irritation, wheezing, or skin irritation when exposed to molds. Severe reactions may include fever and shortness of breath. Exposure to black mold does not always present a health problem unless the person exposed to black mold is immunocompromised.

Stachybotrys chartarum is the infamous black mold initially associated with respiratory distress and the deaths of infants in Cleveland, Ohio in the 1990’s. When wet, Stachybotrys looks greenish black and slimy, but can also look sooty and black. It’s been associated with a number of symptoms some of which are highly controversial, including inflammation of the skin, cough, running nose, nose bleeds, a burning sensation in the mouth and nasal passage, cold and flu symptoms, headache, general fatigue, and fever. It may also cause pathological respiratory changes.

Aspergillus niger is dark gray to black, looks dry, and is very different from Stachybotrys. Health effects associated with Aspergillus niger include allergy and infection of the respiratory system especially in individuals with weak immune system.

But there are many other types of black mold that are not toxic at all, although they could be allergenic. The most common is Cladosporium, which normally has no known toxic side effects. Cladosporiumis common both inside and outside.

Most of us come in contact with Cladosporium every day with no ill effect at all. Symptoms from heavy exposure are usually an increase in allergy and asthma symptoms.

Other molds that may appear black include Ulocladium, Stemphylium, Pithomyces, Alternaria, Dresclera, and Aureobasidium. None of these are known to produce highly potent mycotoxins; therefore, none of these are toxic molds but some such as Alternaria can cause severe allergy symptoms.

If you need to know whether the black mold in your home is toxic or allergenic, send a sample and have our laboratory identify it for you. We’ll let you know whether it’s toxic or not, what type of symptoms are associated with your house mold sample, and how to get rid of it safely and completely.

Dr. Jackson Kung’u is a Microbiologist who has specialized in the field of mycology (the study of moulds and yeasts). He graduated from the University of Kent at Canterbury, UK, with a Masters degree in Fungal Technology and a PhD in Microbiology. Jackson has analyzed thousands of mould samples from across Canada. He also regularly teaches a course on how to recognize mould, perform effective sampling and interpret laboratory results. Jackson provides how-to advice on mould and bacteria issues.

What Causes Mold To Grow?

Mold will grow wherever there is moisture and organic materials. Like any other living organism,…

This message is only visible to admins.

Error: An access token is required to request this resource.
Type: OAuthException

Disclaimer: Information provided on this website is believed to be accurate or to be from reliable sources. However, the creators of this website shall not be held liable for any special,
consequential, or exemplary damages resulting in whole or in part, from the readers use of, or reliance upon the material contained on this website.